The Retreat of O'Sullivan Beare 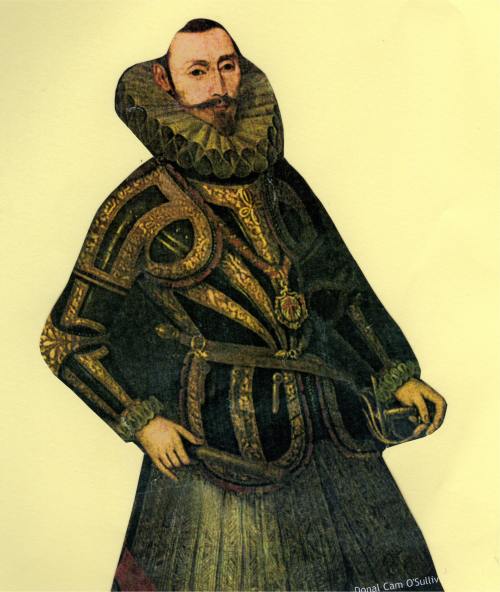 Following the Battle of Kinsale in 1601, which ended with the defeat of the Irish, despite Spanish help, and resulted in the flight of the Earls, the great challenge that had been given to Queen Elizabeth by Red Hugh O’Donnell and Hugh O’Neill was ended.

On 31 December 1602, O’Sullivan Beare set out from the south of Ireland in his flight towards the north.  His territory had been invaded by the President of Munster, his castle had been razed and all its defenders killed.  As the last chieftain holding out in rebellion in the South, there was a price on his head.  In the short space of 15 days he marched over 300 miles, crossed the swollen Shannon in mid Winter, fought countless skirmishes and suffered the loss of most of his people on their harsh journey.  On his arrival at Leitrim Castle, where he hoped to join forces with other rebels, his party was greatly depleted.  Of the one thousand

followers who had set out with him from Glengarriffe (400 fighting men and 600 others), after holding out for months in the lonely glens while awaiting, in vain, the expedition of help from Spain, only 35 remained in his ranks (16 armed men and the resent of the part consisting of men, women and children).

The party left Glengarriffe on the last day of December 1602 and crossed the Shannon about 2 miles south of Meelick, and continued to march northwards.  On January 10 came the toughest day of the retreat as they marched about 50 miles from Killimor to Aughrim, where they fought and beat a superior British group.

In the afternoon, they came to Mount Mary, covered in a thick blanket of snow.  Up to this point, they had experienced no worse than cold, frosty clear days, but now the bitter cold became the greatest enemy.  As he marched onwards from Mount Mary, many of his followers, weakened by hunger, were to die from exposure, while his soldiers had been halved in number since the outset.

The direct route led to Elphin, but he knew that he could ill afford another confrontation with any well equipped group.  Therefore, he led his exhausted people on a wide detour to the Northwest, which meant many extra miles of marching over pathless country, covered with bog, scrub and forest, all deep in snow.

To the north of Mount Mary he passed a small village where he had hoped to get provisions from the local inhabitants but he found that all the cattle and food had been carried away and the people of the district arrayed against him under the command of MacDavid (Burke) of Glinsk, who was the lord of the area.  O’Sullivan withdrew and later returned to Glinsk Castle, marching to the roll of the drums with soldiers disguised as “Royalists” in the hope of being welcomed and given provisions.

They marched towards the castle, sporting the banners they had forced from the British at Aughrim as their own.  The gamble did not succeed and the Burkes were not deceived and O’Sullivan continued on his way until he arrived at the thick woods of Slieve O’Flynn.  As night approached, O’Sullivan received information that the Burkes were in pursuit and that he would be surrounded.

He immediately ordered his men to light great fires so that his enemy thought he was intent on camping for the night, but as the flames rose into the air the group escaped under cover of darkness and fled through snowdrifts with great difficulty.  Though overtaken by the Burkes the following day, their determined attitude made their foes retire and so they arrived at another wood called “Diamhrach” (the Solitude).

Upon entering this refuge the men lay down and fell asleep instantly.  On looking around, O’Sullivan found only 12 companions with him, so he ordered that great fires be lit so his men might be able to locate their leader’s whereabouts.  However, most of them were never to join him again.  In that lovely wood, the locals fed them and supplied provisions and guided them across country on the rest of their journey.  On his arrival in Leitrim Village O’Sullivan Beare looked around but could only find thirty-five of the one thousand people who had set out with him from Glengarriffe.

O’Sullivan Beare and the Glinsk Connection 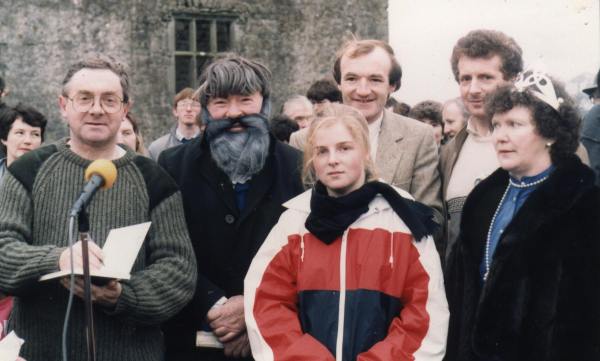 Glinsk Castle today is a skeleton of its former glory, no harp rings out and no pomp and ceremony is to be seen.  We can read about how it might have been, we can examine old documents for clues and try to assemble a picture of the Castle in its days of splendour and glory.  The people of Glinsk view the Castle as a thing of the past but also look to the day when, like the Phoenix, it will rise from its ashes.  With a view to this future the whole community came together to experience life as it might have been at a great Medieval Banquet.

It is hard to believe that the cold grey stones of Glinsk Castle could enthuse a whole community.  The pride of the people in this stately mansion is plain to be seen and was overflowing as they decided to resurrect Sir Ulick Burke, give him a queen and turn the clocks back in time.  On those nights the people of Glinsk were transformed into Lords and Ladies with fine costumes that would have made Cinderella envious.  The trigger for the Medieval Banquets was the recreation of the Epic March of O’Sullivan Beare by Donncha O’Dulaing in 1987 and again in 1997. 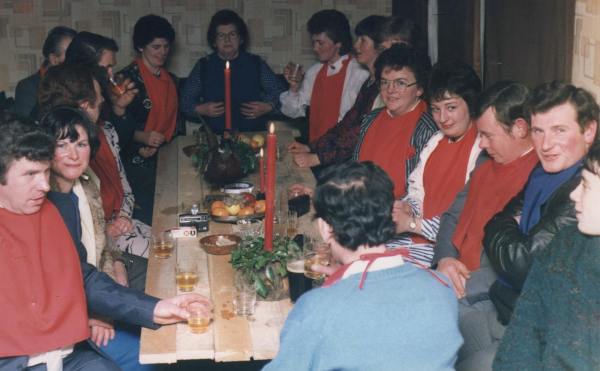 The welcome extended  by the whole Glinsk community to Donncha O’Dulaing was exceptional with practically every family in the community turning out on a rather bleak January day to welcome the weary walkers as they arrived at Glinsk Castle.

The ladies “downstairs” worked feverishly on the Banquet menu the main feature of which was “spare ribs” washed down with the finest mead.  Fingers took the place of cutlery and each course was first served to Sir Ulick and none of the lesser Lords could eat until he had given his approval.

It was a night of pomp and ceremony as the top table was reserved for Sir Ulick’s chosen friends.

Turlough O’Carolan did not appear but the sound of the Harp echoed throughout the Banquet Hall and “Lament for Ulick Burke” and some of O’Carolan’s finest tunes lulled the assembled party back in time. 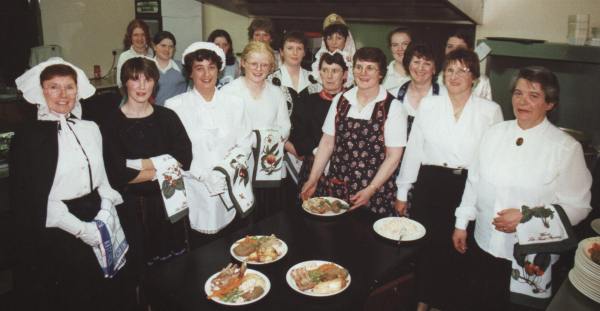 For the banquets of 1987 and 1997 the Glinsk Ladies excelled in their preparation of a real Medieval Banquet.

In his book “Walking and Talking with Donncha” Donncha O’Dulaing remembers the great welcome he received in 1987:

Six miles from Glinsk the community came out to meet us led by horses, pipes, cars and children. A host followed. There were speeches and cheers of welcome at Glinsk Castle from which O’Sullivan Beare had been turned fearfully away.  Now all were welcome… A tree was planted… The children recited their poem for Donal Cam(O’Sullivan): “This is not our promised land”… We had a medieval banquet… Yes, indeed, Glinsk was Special! 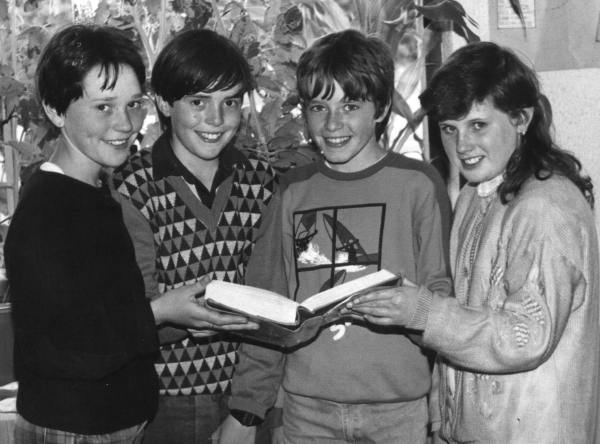 The Pupils of Glinsk National School participated fully in “Donncha’s March” and four pupils: Carmel Nolan, Oliver Kenny, Enda Trayers and Richella Kelly were the first pupils ever from Glinsk N.S. to speak live on RTE radio when they recited the poem “O’Sullivan Beare in Glinsk 1603” The poem was specially written for the occasion by their teacher, Marty Ward.

Snowy slopes showed their tracks,
Winter sunrays pierced their backs,
No wandering star led their way,
But their hearts yearned for a new day.

“We must stay”, some cried aloud,
“We march on”, O’Sullivan vowed,
“Take my heart and take my hand
This is  not our promised land”

“Mount Mary’s slopes we must o’ercome,
March on – to victory, to freedom”
They raised their banners to the sky,
Flags and swords were raised on high.

To Glinsk they came, to the Castle bold,
“There is no room” – they were told.
As McDavid chased their hungry way,
The fires  they lit kept the enemy at bay,
And those that were lost along the way,
Live on in our midst to this very day.