By glinskcommunitygroup_ob9rlam4August 28, 2022Archives
No Comments 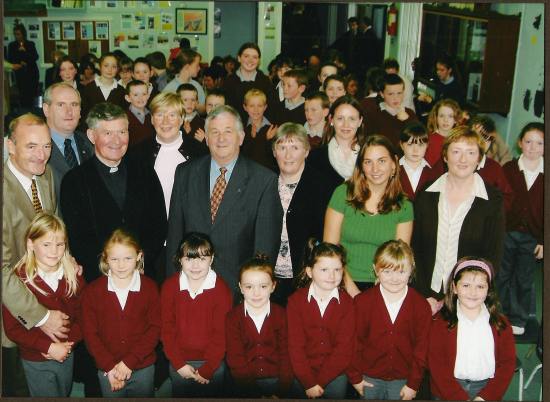 In the 2005 “Irish Independent”  ‘Building for the Future’ project competition 1500 schools participated and Glinsk NS were successful in taking the county prize for Co. Galway.  Mr Joe Collins of CIE attended the school to present the award of 3,000 Euro.The Glinsk project told the story of the making of a film at the school.  The Department of Education chose fifty schools to take part in a new initiative entitled “Film in Schools”(FIS) and Glinsk NS were presented with a modern Digital Film Camera and associated equipment to enable the staff and pupils to make a film of their choice.

The 15-minute film entitled “Our Local Heritage” was a celebration of the wealth of heritage that abounds in the Glinsk area.  It also placed strong emphasis on the fact that “Heritage” is all around us in our natural landscape as well as in our historical features.

We usually hear of somebody writing a book and then the book being made into a film!!  However Glinsk NS did it the other way around and when the film was complete they told the story of the making of the film in the project which was submitted for the “Irish Independent” competition.

The project was entitled “Footprints” and emphasised that we all leave a mark on the landscape in which we live….It is all of these individual “Footprints” which merge together to give us our local heritage.  The project recalls the footprints of people who have made their mark on the local Landscape.  The pupils re-visited the spot where Parnell made his last speech, where Fr. Flanagan of Boystown was born and they also discovered a link between Glinsk and Daniel O’Connell.

Among the more interesting discoveries during the research for the project was the discovery of a “Beatle” – this wooden implement was found in Glinsk Bog – at first, they wondered was it a giant spoon or a wooden spade….but with the help of experts from the National Museum, they found that it was actually a “Beatle” that is an implement which was used as part of the process of getting linen fibres from flax.   This was the first evidence that flax was once grown in Glinsk and that Linen was made. 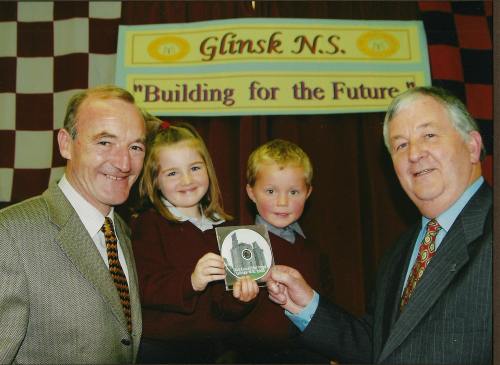 Presentation of a copy of the School Film, “Our Local Heritage” to Mr Joe Collins.
The presentation was made by the two youngest pupils at the school in 2005.