Glinsk Castle rises majestically before the eyes of the stranger who enters Glinsk. It is a sight that gives focus to the whole Glinsk area. The castle was the main trigger which resulted in this collection of  history and lore. Can one escape the majesty of an Irish castle?

Driving through the island of Ireland one can admire a great variety of scenery.  One can feast the eye on the majestic Kerry mountains or stroll through the hills of Wicklow.  To visit the Giant’s Causeway makes one realise the power that lies within our World.  To step back beyond the age of the Pharoahs we can enter Newgrange and see the rays of sunlight that penetrate to the core at the Winter Solictice.  To stand on the rocks of Dun Aengus and listen to the waves lapping the cliffs is to stand on the edge of the Universe.  To enter Glendalough is like being the first visitor admitted to a secret place of mystery as if untouched by human hands for centuries.  To climb Croagh Patrick is to join hands with past generations who sought peace and reached for the summit.  Only sadness can befall the person who strolls through the Famine Museum in Strokestown or is touched by the awful silence of the bare stone ruins of the deserted village on Achill Island.

The forty shades of green are to be admired on this emerald isle.  There are many jewels in the crown of scenic spots to be seen throughout our “green and misty isle”.  Of all the sights to be seen, few can ignore the opportunity to stop and stare at the splendour of an Irish castle.  Whether it is located on a busy highway or tucked away at the end of some boreen – the Irish castle is always worth a second glance.  Like a huge oak tree that sends its roots deep into the fertile earth so also each Castle is anchored deeply and has grown out of the history of our people.  Each castle gives us a sense of timelessness, a feeling that we are not alone, we are walking on much-trodden ground.  Each giant ruin also reminds us that we leave many deeds behind us.  We, too, leave tracks on our landscape – our work can live on in the same way as the stone masons of old have left very definite punctuation marks on our landscape.

As we stand and stare we must remember with a sense of awe the craftsmen of old.  Their strong arms laid each stone with care and fixed it firm against the wind and rain.  They mixed a mortar which allowed the building to breathe as naturally as we do.  The architect’s of other centuries were expert at designing buildings that would stand the test of time but above all, they knew how to give each one a great countenance of strength, power and grace.  Each traveller who trains his eye along the graceful lines cannot but feel humbled though the walls may lay bare and naked.  Each empty shell stands as if it awaits the call of Prince Charming, as though a single touch of a fairy wand could transform the silence into a scene bursting with life and majesty.  As we gaze we wonder if each ruin is simply sleeping like the ancient warriors of Ulster awaiting the clarion call to play their part again. 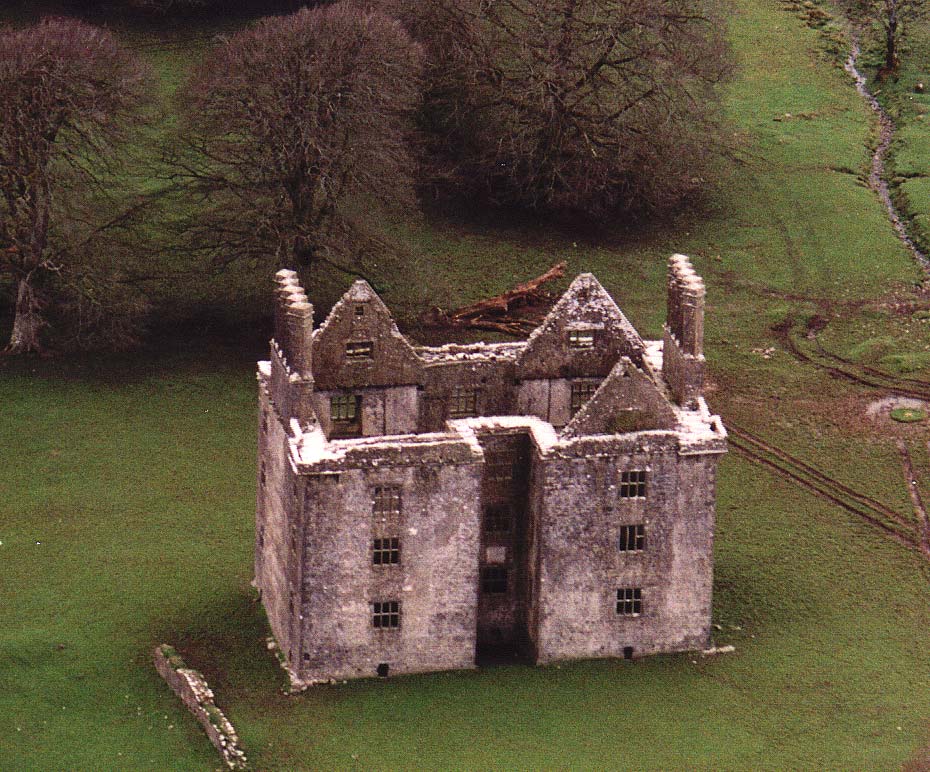 The Normans brought a style of Architecture to Ireland which held some of the Romanesque grace with great arches and fine vaulted roofs.  Many Norman buildings in Ireland retain a number of fine features.  Glinsk Castle is a good example with its fine chimneys, cut stone windows and some defensive features.  Even in its ruinous state, as it is today, Glinsk Castle stands proudly and reminds us of the great craftsmanship of the 17th century when each Castle was a status symbol of the powerful families who ruled over the land.  The pride, strength and courage of the owners seems to ooze from each stone.

The site, as was usual with Norman builders, was chosen carefully.  A plinth of limestone rock gives a solid foundation.  Its location gives the Castle a commanding position with no hills overlooking it.  It lies to the east of a right angled bend in the nearby river.  A large limestone quarry was located in nearby Turla and a limekiln at Ussey  probably provided the lime used in the mortar.  A plentiful supply of native oak was available nearby which provided the strong planks needed for both construction and scaffolding.  Glinsk is famous forview of all of the five counties of Connacht which gave the townland its name “glin-sce” meaning clear-view.  From the Castle one gets an excellent view of the “Glen of Glinsk”, this being a unique glaciated valley, known for its exceptional beauty.  This provided a view from the front windows, which was always pleasing to the eye.

As one ascends the hill towards the castle a section of the old bawn wall can be seen to the West of the Castle.  This wall was one metre thick but a section of only 18 metres in length now remains.  This wall stands approximately 3 metres high externally and 1 metre on the inside.  Another part of the bawn remains in the base of a turret which was circular and 5.7 metres in diameter.  The remains of this turret is now only 1 metre in height and is  poorly preserved.  Though little remains of the bawn there is enough to show how big it was. 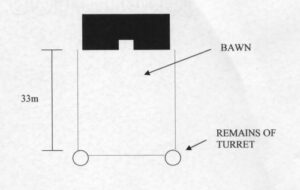 As we approach the Castle we can see that it faced south to catch the maximum amount of sunlight.  The plan is really rectangular in shape with two symmetrical towers projecting from the south wall.  Each tower has a plain rectangular window at ground level which allowed light into the underground basement. On either side of these windows is a gun loop showing a small hold on the external face of the wall – but inside allowing a wide angle view for looking out or shooting out.  The recessed centre section of the castle has a similar window at ground level. 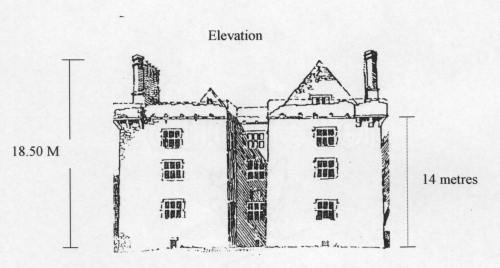 The sides of the towers are very plain and have little decoration or features. Additional gun loops are located near the corners. These are a great example of craftsmanship in stone. The windows are triple light mullioned windows which are transomed.

The windows on the South wall are matched by those on the North wall.  Each window has a neatly carved “eyebrow” which adds great style to the structure but they had a very practical use keeping water running down the walls away from the windows. 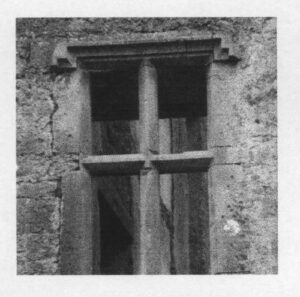 The recess in the front of the castle features plain single light windows on each storey.   The windows on the East and West walls feature twin light transomed windows at each floor level.  Matching windows were also built into the roof gables with a little triangular eye above them.   Stone work throughout  is well cut and finely dressed.  Fine examples of stone work are the perfectly preserved corner barbicans at roof level on the projecting towers on the South face. 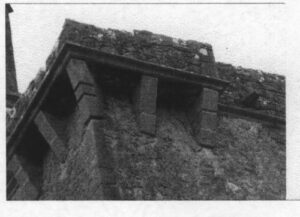 At roof level above the ground floor entrance on the North wall is a fine machiolation.  This was built for defence purposes and allowed boiling water or other such missiles to be poured down on unwelcome visitors. 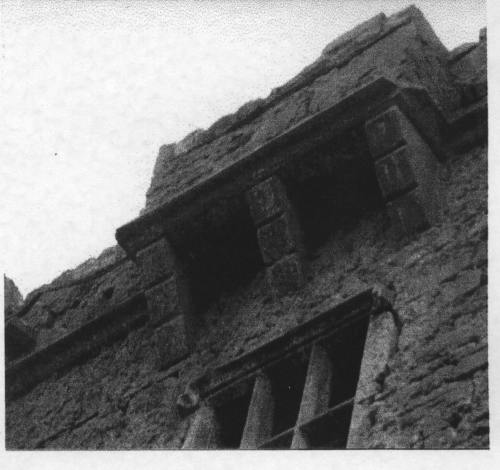 The entrance in the centre of the North wall features a pointed arch.  The arch is made up of three segments of stone which was carefully pock-marked for decorative effect while the corners of the stone were dressed and chamfered.  The outstanding feature is the lofty chimneys which stand tall and proud even though they have had to fight the elements for nearly four centuries.  Each chimney is made up of five lozenge shaped shafts which give the castle a real touch of elegance. 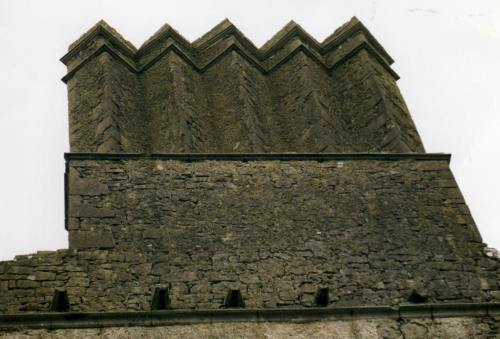 Little of the roof remains except for the gable walls.  The roof was made up of two paralleled gables.  While there is a local tradition that the roof may have been thatched it seems more likely, judging by other castles of a similar period, that it had a slate roof.  The roof drained onto a flat surface while the water escaped through a series of “slop stones” all around the castle. 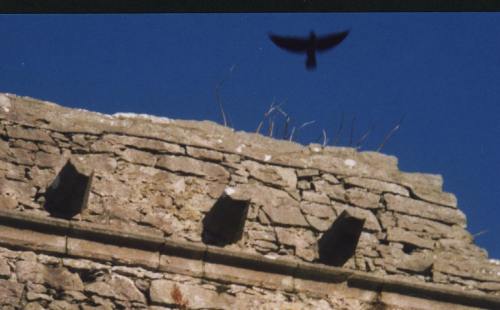 It also appears that access to the roof and the path around the top of the castle was through a small doorway in one of the North gables – as at Dunguaire Castle.

Internally, the walls show all the signs of destruction by fire and all internal features have been destroyed.  One can still visualise where each floor had been fitted and marks on the walls show clearly how the castle had been divided into rooms.  Large fireplaces still remain to be seen.  Some plaster remains on the internal walls but not a trace of the elegance of its former internal glory remains to be seen.

Overall, the castle is a monument to great architectural and building skill.  On the South facing wall of the recess a simple square space stands above the first floor window – This space once held the proud Coat of Arms of the MacDAVID BURKES of Glinsk. 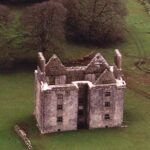 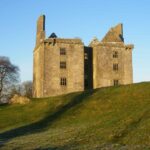 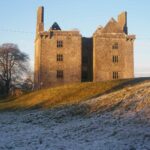 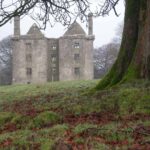 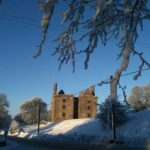 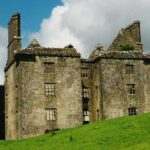