The Burke Effigy at Ballinakill Abbey 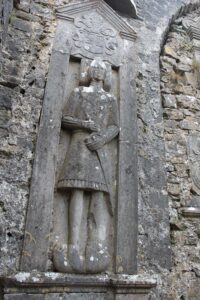 THE RIDDLE OF THE BURKE EFFIGY:- On the inside of the South Wall there is a fine limestone effigy of a Norman knight. Burke family tradition believed that the effigy was a likeness of William(the Conquerer) DeBurgh – the first DeBurgo to set foot on Irish soil. Normal 0

Much debate has surrounded the fine effigy of the DeBurgo Knight in Ballinakill Abbey.  Burke family tradition has always been that the effigy was none other than William “the Conqueror” DeBurgh, the father of the entire Burke family in Ireland.  This tradition is often disputed as some have thought it more likely that the effigy was that of Sir David’s father, William.

Tradition tells of a great meeting of the Burkes at Athassel Abbey (now known as the Abbey of Golden) which decided that the effigy of William DeBurgh should go to Glinsk, to the family of MacDavid, being the head of the senior line of Burkes.

William DeBurgh was buried in Athassel Abbey following his death in 1205-6.  So it is understandable that a fine effigy was cut in his memory.  Genealogies would not seem to agree that the MacDavids were, in fact, the senior line but H T KNOX (JRSAI Volume 3, pg 46-59) argues that there may have been a mistaken impression that the Burkes of Limerick and Tipperary were descendants of William, the Sheriff – If this was the case then the MacDavid clan of Glinsk would have held a strong claim to the coveted effigy of the first Burke in Ireland.

The dilemma posed by the date which is clearly visible at the base of the effigy today poses a further problem.  It can still be clearly read as 1116.  Again, H T Knox offers a possible explanation.  The date of 1205, the date of William DeBurgh’s death, is given by Irish annalists.  (In Ireland the year began in January.  The English official year began in March.)  While there is no official record, it is thought that William actually died in the early months of 1206 (which would have been officially recorded as 1205).

If we accept the date as being 1206 then the original inscription might well have been MCCVI in Roman numerals.  “Slight defacement might cause the second ‘C’ to be read as ‘X’ and give the date 1116”.  (Knox).