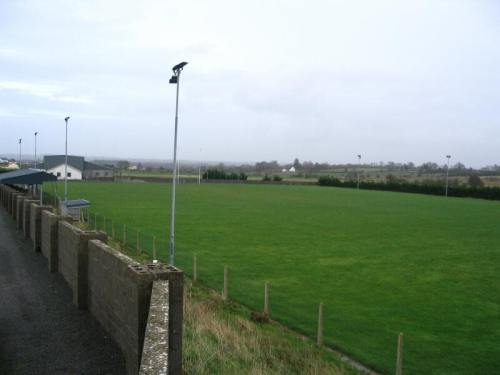 The following officers were elected:

It is once again the time of year to look back at events within the club over the past year. It was a very active year and had its highs and lows throughout it. On the field of play we participated in most competitions, the highlight being the winning of the league by our Under 14 team. Off the field our main objective for the year was to complete the extension to our dressing rooms and erect ball stop nets.

The main affairs of our teams were as follows:

The Junior A team had a number of good results during the year but an indifferent start to the season when vital points were dropped came back to haunt us in the concluding stages edging us out of the knock out stages. We exited the championship in the first round following our defeat by Milltown. Our thanks to Seamus O’Toole and his selectors Liam Kenny and Michael Lundy for their time and effort during the year.

Fielding one of the strongest Junior C teams for some time we had a very good season in the league qualifying for a play off for the knock out stages. We had similar success in the championship qualifying for the North Board Semi-Final. There seemed a good possibility of winning one or both of these competitions. Unfortunately there was a significant drop in training once the Junior A season had come to an end and with it our chances of success. We were defeated by Killererin in the league play off and by Kilkerrin/Clonberne in the championship. Thanks to John Dowd, Martin Cunniffe and Edward O’Toole for looking after this team.

As decided at last year’s Annual General Meeting we did not affiliate an Under 21 team in 2008.

The minor team put in some good performances but were lacking in strength and had to give way to stronger opposition. I would like to thank Stephen Neary and his selectors for their effort and work with this team and also the Under 16 team.

Although they started with purpose the under 16 team did not gain any honours in the league or championship.

This team had a very successful year and provided our only success of the year by defeating Salthill to win the League Final. This was a remarkable achievement considering the fact that there was a very limited number of players on the panel. I would like to congratulate John Dowd and John Collins on a wonderful year’s work and on an excellent achievement.

As was the case last year we were unable to compete at competitive level in this grade. While we had reasonably good panel numbers many of those players were too young to play against serious league opposition. They were given a good season of coaching and training and also played some challenge games including a game against Caltra’s second team in which Caltra beat them well. They also competed in the Creggs Harvest Festival Tournament, losing to St. Kieran’s and Oran. On their last evening training each player got a treat and a medal which were well appreciated. This was funded by the management team of Martin Hurley, Dessie Joyce and James Shevlin.

I am delighted that a new initiative took place this year with the introduction of coaching for Under 10 players for the first time. I compliment and congratulate Gabriel Trayers, Eamon Hegarty and Martin Hegarty for taking the initiative and hope it will go from strength to strength.

The primary school team competed in the I.N.T.O.7 a-side tournament and in the Cumann na mBunscol league and did not qualify for the final stages of either competition. They also took part in the Markie Fitzmaurice tournament in Creggs and the Tom Lohan tournament in Glinsk. I congratulate the school on once again hosting the Tom Lohan football tournament which was won for the second time by Abbey Boys’ Roscommon.

I thank all our managers, trainers and selectors for the enormous amount of time and effort they gave to their respective teams throughout the year.

We once again hosted a Cúl Camp Summer Camp for under age players during the summer. It was well attended and I thank our coaching officer Martin Cunniffe for co-ordinating the week and looking after registration. A coach from the Galway Coaching Group attends the primary school weekly to coach children of all classes.

We were successful in getting a National Lottery Grant of €60000 and a further Clár grant of €12000 towards the cost of development projects. These were extension of the dressing rooms, provision of ball stop nets at both goals and sanding and draining of the pitch. I am delighted that the extension of the dressing rooms has been completed and is very satisfactory, the ball stop nets are in place and a storage shed has been erected for the storage of equipment. Toilets are still to be places I one dressing room which will result in the outside entrance door which was used to enter the dressing rooms and the community centre being closed off. I thank Stephen Neary Construction for their work and for their co-operation with the club during the project. I thank Seamus Murray who was our technical advisor and I thank especially Shane Curley who devoted so much time and energy in keeping the project and the payments on target.

Again the club lotto was the main means of income to meet the running costs of the club. We need it to keep our club going and I believe it could be much more successful if all members and players put in an extra effort to sell or promote a few extra members or envelopes every fortnight. I sincerely thank, on all your behalf, all who have been so diligent in looking after the draws every fortnight. It is a big commitment and they deserve our highest gratitude.

The issue of membership is being stressed more and more at club, county and national level. It is vital that everyone involved in the club including all players should be paid up members. Only fully paid up members on a specific date have the right to any say or voting rights in the affairs of the club. A player who is not a member and is playing on a team is technically illegal and does not have any player injury scheme entitlements.

As decided at a previous AGM, and noted in last year’s report, the club now covers any player insurance excess incurred in any claim. The rest of the cost is recouped from the Player Injury Scheme. This recovery can only be made if an injured player notifies the club of their injury within 60 days of the injury happening. Failure to do so means that the claim can not be processed and the player will have to bear the loss. All physiotherapy treatments to be reimbursed must be sanctioned by the club first.

I congratulate the Brian Enda Kilcommons Defibrillator Group for the wonderful progress they continued to make during the year. Nearly 200 people have been trained, four local instructors have been provided and six defibrillators are now in place. I am delighted that Glinsk G.A.A. Club has also provided a defibrillator for general use and believe that now that the dressing rooms are completed it should be mounted in a suitable location on the building and also be brought to matches. I am delighted that some members of our club have undergone the training and I urge many more to train too, especially players and those in charge of teams.

I would like to extend get well wishes to all who are ill at the moment, and extend a special get well wish to Luke Cunniffe, and I hope that he returns to good health quickly. Luke has been a great servant of our club as a player, manager, officer and lotto contributor. I also extend good wishes to John Joe Cunningham who has spent a lengthy spell in hospital.

The outing of 2008 went to Dundalk. I thank Andy Quinn for helping to arrange the activities in Dundalk. This outing now appears to be a permanent fixture in our calendar and was greatly enjoyed by all who travelled. I thank Shane Curley for making the arrangements for this outing.

I congratulate the Glinsk Childcare Centre for its ambitious plans and on the building of their impressive child care centre. I wish them the very best in their efforts.

I congratulate Shane Curley and the Glinsk Ladies team for a very successful year, and I wish them the best of luck in their final which will take place in 2008. Similar to our own teams their season has dragged on a lot too, which is undesirable.

I offer sincere sympathy to all who suffered bereavements in the past year.

There are many people I would like to thank for the successful running of the club during the year.

I wish all the best to all the officers, managers and selectors or the coming year and hope they will enjoy a successful year.