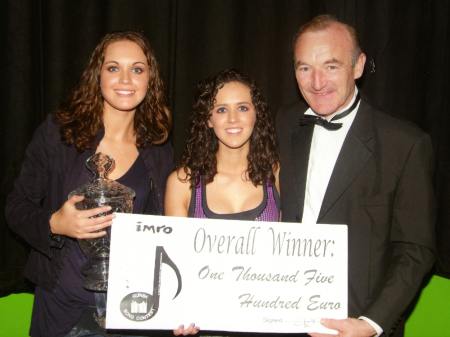 Ciara and Cathy Newell, Galway sisters who were members of the very successful “Bellefire” group penned “Heaven Only Cries”which won the 21st Song Contest at Glinsk in July 2008. The song was sung beautifully by their younger sister, Neasa, accompanied by Ciara. They received their cheque for €1,500 and are pictured above with Marty Ward, Director of Glinsk Song Contest.

Glinsk Song Contest celebrated its twenty-first Anniversary with an absolutely brilliant performance by thirteen finalists at Glinsk Community Centre.  A packed audience really enjoyed the final with the sheer quality of the finalists making it the best Contest ever.  Annually, since 1988, there have been thrilling finals at the Glinsk venue, but this 21st Anniversary surpassed all previous records for sheer quality.  There was general agreement among the audience and adjudicators that this was the biggest and best Contest ever.

The Glinsk contest is the biggest and longest running Song Contest in Ireland and has been supported over the years by Galway Co. Council(Arts Section) and IMRO(The Irish Music Rights Organisation)

As the scores of the adjudicating panel were flashed onto the electronic scoreboard, by Leslie Long, the suspense was palpable as the top two acts were run to a nail-biting finish and it was only when the final adjudicator gave his vote that the winner emerged with just a one-point margin.  Cathy and Ciara Newell(Galway & London) former members of “Bellefire” were victorious with their song entitled “Heaven Only Cries” which was performed on stage by their younger sister, Neasa. 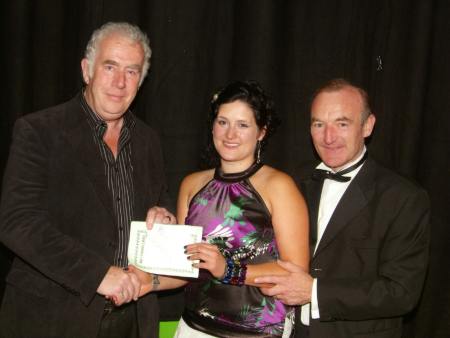 Runner-up in the contest was former “You’re A Star” finalist, Onya O’Doherty from Bundoran, with her song “Zoom”. Onya was also the recipient of a special prize sponsored by Eurovision winner, Brendan Graham, for the most original lyric.

When presenting his prize, Brendan Graham paid a handsome tribute to the quality of all of the finalists and to the organisers of the Glinsk Contest. He recalled the early years of the Contest when he himself was a finalist at Glinsk and spoke of the importance of the Glinsk Contest for all songwriters who wanted to test their songs in public. “This Contest plays a hugely important role in affirming young songwriters in the art of song writing” he said. 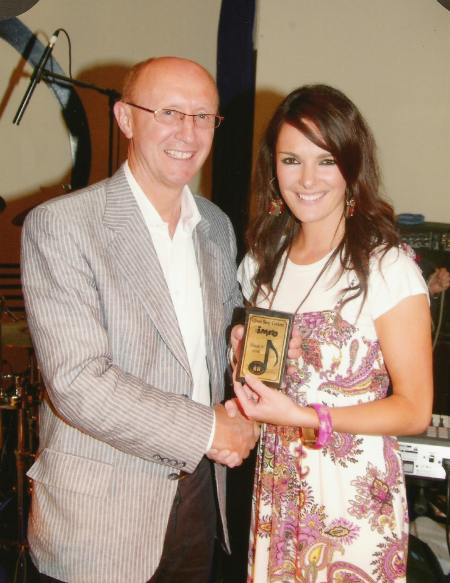 Third prize went to Elaine Weldon from Wexford who is a member of well-known all-girl band “Jade” who had a long successful run on “You’re A Star” some years ago. This was Elaine’s first time to perform solo. Elaine is pictured receiving her award from Tom Cuddy, representing the well-known Cuddy Family from Glinsk who are outstanding supporters of the Glinsk Song Contest. 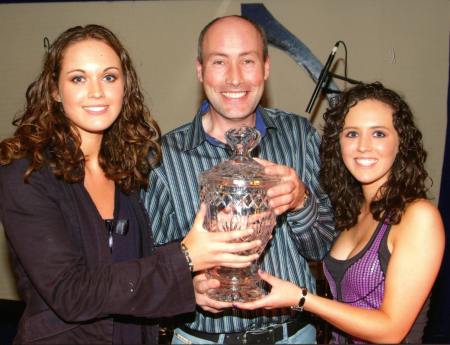 The Newell sisters received the Gannon Brothers Crystal Trophy from Alan Gannon, representing “Gannon Brothers” who have been major sponsors of the Glinsk Contest over the years. 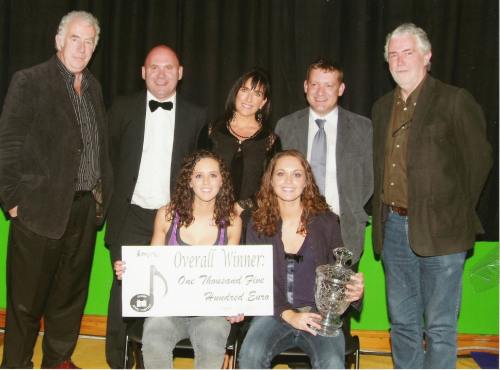 At the presentation to the winners were Mr Brendam Graham, Adjudicator and former Eurovision winner, Mike Keenan, Adjudicator, winner of Ceolta Tire on TG4, Annette Griffin, Adjudicator, well-known Ashford Castle Celebrity, Tony McTighe, Adjudicator, representing IMRO and Charlie McGettigan who was special guest on the night and a former winner at Glinsk.