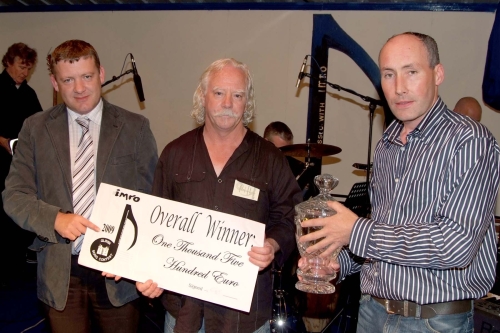 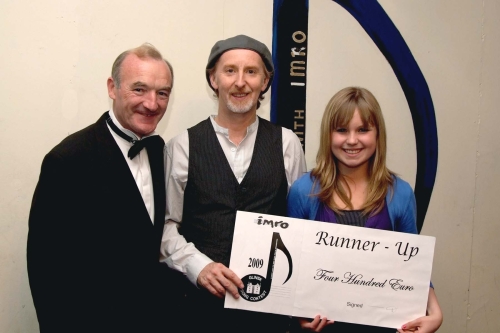 John Mulligan in the “Roscommon Champion” reported as follows:

A NIGHT that symbolises the true meaning of community and is now one of the biggest musical events on the Irish calendar, the 22nd running of the Glinsk Song Contest, once again drew a full house to the Community Centre Glinsk on Sunday night last. This competition has grown into a premier event on the Irish music scene and this year was no exception with an incredible standard throughout the night. Unfortunately only 12 of the 13 songs were performed on the night as a bereavement meant the withdrawal of the song “Move To Your Heartbeat”, but that did not diminish the excitement and drama that followed.

The competition began with Evelyn Campbell and her self-penned entry “Straw Love” which was well received. This was followed by Eamon Wall’s lament to earlier times “Time Stood Still”, a song that went down well with the audience. Pete Creighton’s love song “If I’m Only In Your Heart” was third on the list and had all the hallmarks of a competition song that could go down well in Eurovision. It got a good reception from the audience at the centre.
Songs five, six and seven were keenly anticipated by everyone with several mentioning one of those as a possible winner. “Watergrasshill”, written by Patrick Silke and sung by the composer was an excellent effort with some great lyrics and a superb harmony.

This was a hard act to follow but it was followed by the outstanding “Love Story” written by Iris Wade who had appeared in the Abbey Hotel the night previously. A beautiful song that was well received, many felt that this could be a dark horse in the competition. But there were some excellent songs still to come. Gerry Henderson is a regular to the Glinsk song contest and his memory of a grandson playing was the basis of his song “Nathan James Lullaby”. The lyrics touching a chord with many present. Next up was Dene Lane, a regular of the competition who won the very first Glinsk Song Contest with “Glinsk, the pride of my heart” in 1988. His performance of “Can’t Guarantee Security” was full of energy and got a great reception.

Karen Minnock was song number nine with “What If I Never” With her backing singers and good travelling support, her song went down well before former winner Jody Gallagher took to the stage with his own song “Crazy, Mixed Up World” written after watching the news one evening and finding that there was nothing but bad news on it.
Two songs remained, Barry Tierney from Kinsale was next with a well written song called “Over you Sue”, a nice number that brought the crowd with it for the three or so minutes. Finally Maria Parsons sang Caroline Burke and Stuart Crampton’s song “Say It Now” bringing to an end of the 12 songs for this year’s competition.
While the adjudicators made their way to hand over their scores and double check that all was in order, the audience were treated to well-known American singer-songwriter Jeff Tuttle who entertained the audience. Soon it was time for the results and after much deliberating it was time to return to the hall and announce who would win the Gannon Brothers trophy and the cheque for 1500 Euro presented by Alan Gannon of Gannon Brothers and Tony McTigue of IMRO, chairman of the adjudicators. The voting had been been very close throughout and the results were anticipated by the full house in Glinsk.

MC Martin Ward (who was excellent throughout) read the results in reverse order. In third place with 68 points was Barry Tierney with “Over you Sue”, second was Jody Gallagher with his “Crazy Mixed Up World” but the winner with a total of 72 points was Patrick Silke from Dublin with his song about Watergrasshill. There was no doubt that this was a popular winner and the reprise was cheered along by the audience. The MC also paid tribute to all the sponsors of whom there are too many to mention and to the community of Glinsk that pulled together magnificently to make the show a marvellous success. With 22 years under its belt, there is hope that this will continue for another 22 and going on last Sunday night, it is hard to see why not.