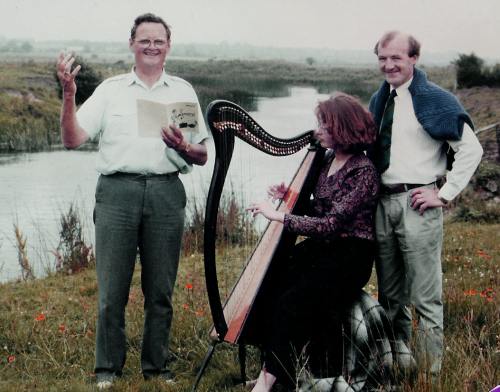 Way back in 1988, the very first winner of the Glinsk Song Contest was John Duggan with a song entitled “Glinsk, the Pride of My Heart” which was sung by Dene Lane. John is pictured here on the banks of the River Suck, rehearsing his song with daughter, Aoife and Song Contest Director, Marty Ward. 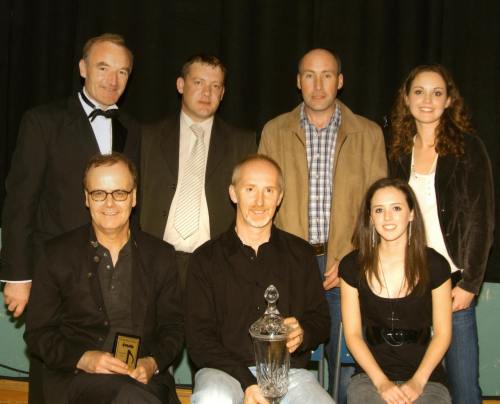 Jody Gallagher’s song “Day’s Gonna Come” took the top award at Glinsk in 2007.   The song was very much born of the ‘green agenda’ and was a timely reminder of the need for all of us to play our part in protecting our fragile environment.  Jody received the  “Gannon Brothers Crystal trophy” from Mr Alan Gannon and the winning cheque from Tony McTighe of IMRO.   All finalists received trophies courtesy of “Ward & Burke Construction”  and the orchestra for the night was sponsored by the Cuddy family.

Runner-up on the night was “You & Everything Else” composed by Bellefire girls Ciara and Cathy Newell and performed on the night by Neasa Newell.  For Neasa, it was a dream come true as she had first attended the Glinsk Song Contest when she was just three years old and had always harboured a wish to perform on the Glinsk stage.

Third prize went to Gerry Henderson from Belturbet in Co. Cavan with his song “Time Flies” 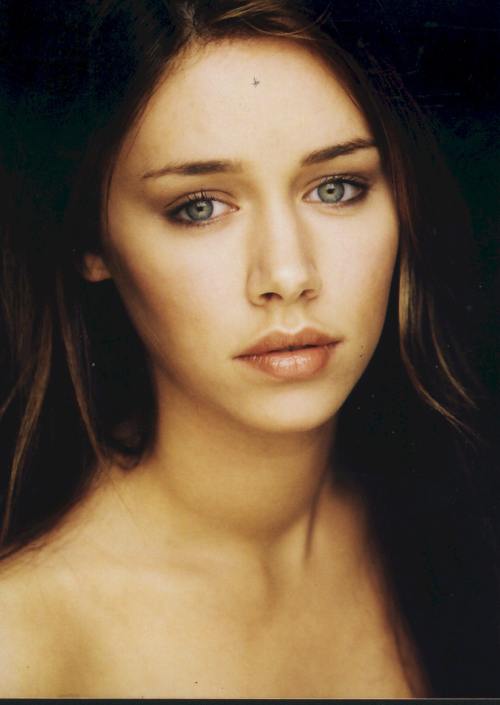 Una Healy was a very popular winner at Glinsk in 2006 and in 2004. One of the few double-winners at Glinsk. Since then, Una has become a leading figure in the group “Saturdays” who in December 2008 were on top of the charts with their song “Up”. 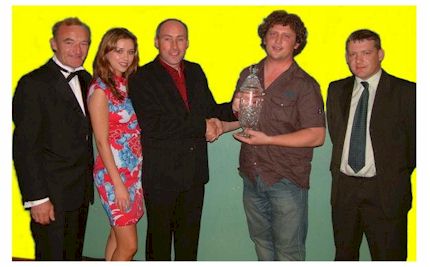 Cathal Molloy was overall winner at Glinsk in 2005 with a song he co-wrote with Steven Carey. He is seen here receiving his trophy from Alan Gannon under the watchful eyes of Una Healy(Adjudicator), Tony McTighe(Adjudicator, representing IMRO) and Marty Ward, Song Contest Director. 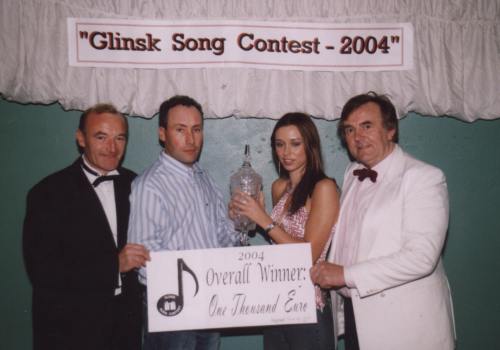 Una Healy receiving her cheque and trophy in 2004. 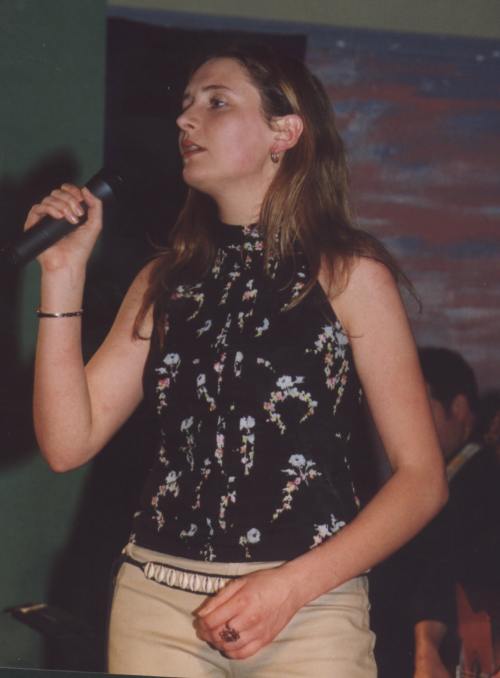 Emma Staunton from Eyrecourt, Ballinasloe was a popular winner in 2003 with her song entitled, “Honoured” 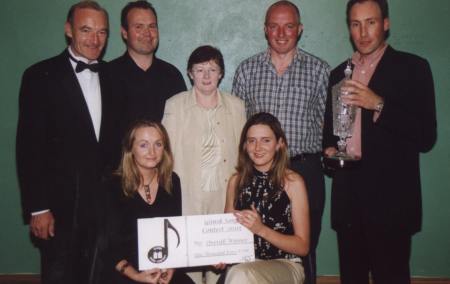 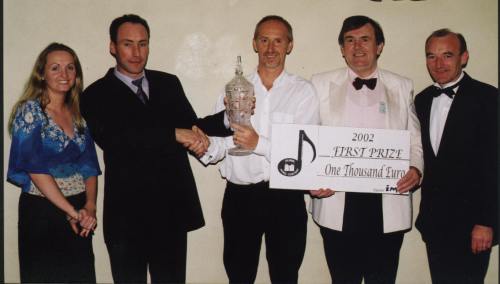 Jody Gallagher made his first visit to Glinsk in 2002 and marched back to Donegal with the cheque and trophy. He is pictured here with Ms Marilyn Gaughan, Arts Officer, Galway Co. Council. Glinsk Song Contest appreciate the support of Marilyn and Galway Co. Council over the years. 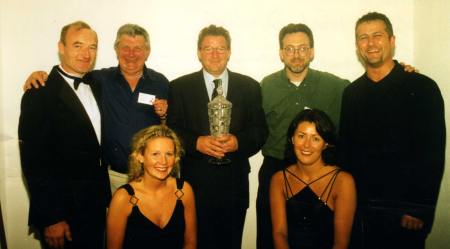 The only songwriting partnership to pull off a “back-to-back” double victory was Castlerea based, J.J. Flannelly and his song-writing partner, Galway-based, Tommy Moran. Their first victory came in the year 2000 and this was followed up with another victory in 2001. Picture above shows the 2000 presentation: Left to Right(Back): Marty Ward, Song Contest Director, JJ Flannelly, Winning co-composer, Mike Hanrahan, representing IMRO presenting cheque and the ASCI trophy, Tommy Moran, Winning co-composer, Paul Burns, Singer of the winning song. Front: Marian Hosty and Jacqueline Kenny, backing vocalists on the night. 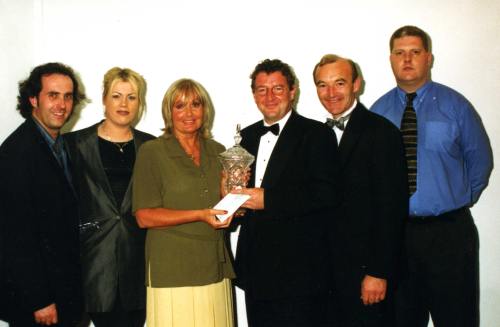 Over the years one of the successes of the Glinsk Song Contest has been the fact that Song writers returned again and again. One of the most stalwart supporters has been Dundalk-based, Ann-Marie Morris who has been frequently among the prize-winners and in 1999 she was overall winner. Ann-Marie is seen above receiving her cheque and trophy from Mike Hanrahan, representing IMRO. Also in picture is Marc Roberts, Dawn Martin, singer of the winning song, Marty Ward, Director and Anthony Brennan, Chairperson. 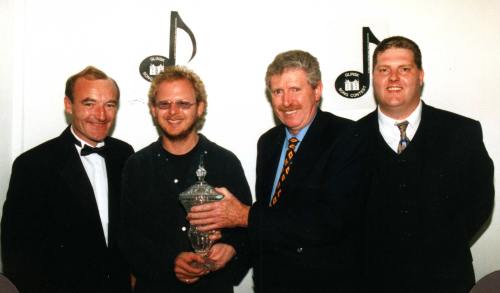 Tim Ambler was the Dublin-based solicitor who exchanged his brief case for his guitar case and composed a great number of songs for the Glinsk Contest. In 1998, his song “The Corner” was a very popular winner at Glinsk. Tim is seen above receiving his cheque and trophy from Mr Pat Kelly, representing IMRO – Also in picture are Marty Ward, Director and Anthony Brennan, Chairman. 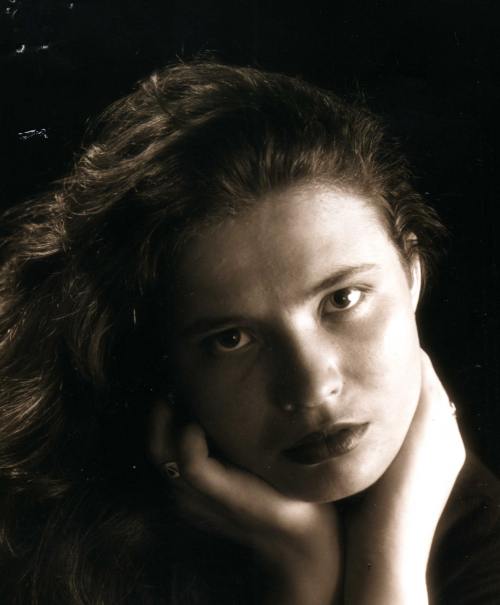 The youngest ever winner of the Glinsk Song Contest was Mayo born, Aileen Tighe with her song “In My Life”. She received her IMRO-sponsored cheque and IMSA trophy from Charlie McGettigan at the 1997 Contest.

The winner in 1996 was Wicklow Songwriter, Marian McEvoy with “Last stop for 25 Miles” 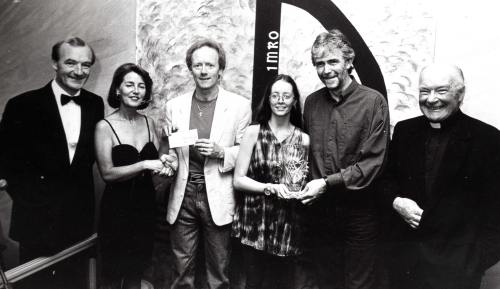 The winner in 1995 was Denis Allen with his daughter, Linda singing “What Else Would Lovers Do” Also in picture is Marty Ward, Song Contest Director, IMRO Representative, Charlie McGettigan, Fr. Garvey. 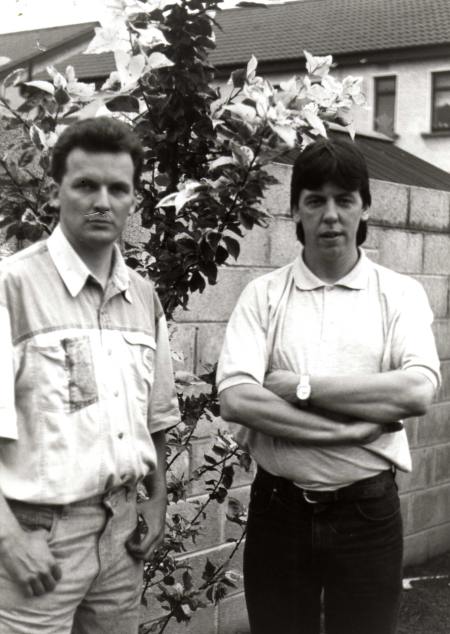 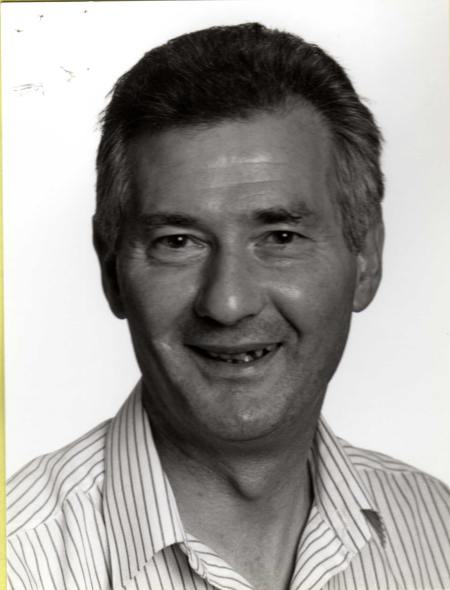 The winner in 1993 was Pat Walsh from Tullamore with his song entitled “Everybody Loves A Lover” which was performed by “Angel”. 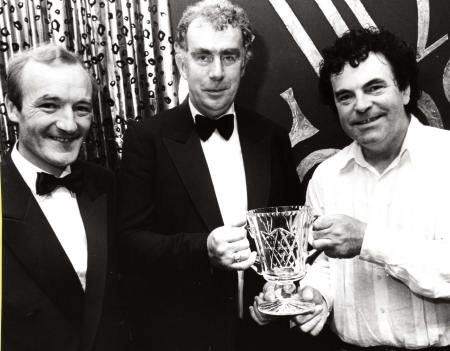 In 1992, the headlines read “Dublin Grandfather wins 5th Glinsk Song Contest”…..the man in question was none other than well-know musician and radio presenter Niall Toner, with his song entitled “Fallen Angel” The picture shows Niall Toner receiving his cheque and trophy from Mr Brendan Graham who was representing IMRO on the night. 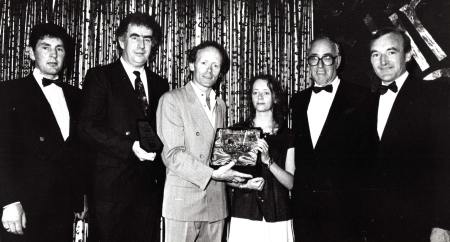 1991:- “Someday I’ll be Goin’ Home” was a very popular winner for Denis Allen, accompanied by his daughter, Linda. Above we see Mr Pat Condon of IMRO making the presentation to the winner. Also in the picture is Mr John Dee, representing the Irish Association of Songwriters, and Brendan Graham who was runner-up with his song entitled “Only Love Can Cut So Deep” which was performed by Niamh Kavanagh.

1990: The Third Annual Glinsk Song Contest was won by “Light A Penny Candle” written and performed by Charlie McGettigan. Picture above shows Charlie receiving his award from Mr Pat Dempsey of IASC and Mr Pat Condon of IMRO. Also in picture is Joe O’Neill of “O’Neill Sound”, Glenamaddy who have provided superb sound for the Glinsk Contest over the years. On left of picture is Marty Ward, Song Contest Director. 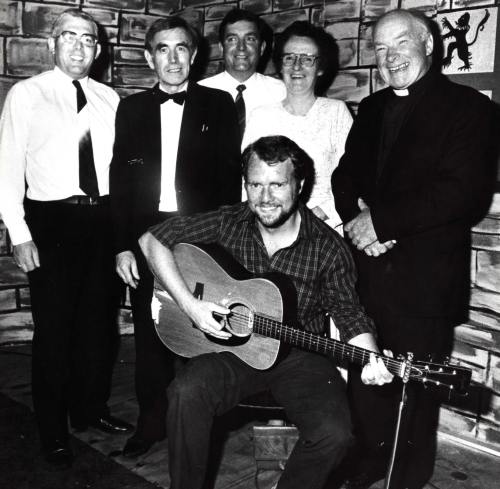 In 1989, the second Glinsk Song Contest attracted entries from songwriters throughout Ireland, Of the thirteen finalists, five songs came from Dublin writers, two from Cork, one each from counties Waterford, Louth, Limerick and Roscommon plus one from Glinsk and one from nearby Williamstown. Michael O’Halloran from Waterford emerged as winner with the song “Leaving Nancy”. Picture shows Gerald O’Donoghue, Musical Director in the early years, Joe O’Neill of “O’Neill Sound”, Glenamaddy, Charles Lynch of Galway County Enterprise Board(adjudicator), Mary Horkan(Adjudicator) and Rev. Fr. Garvey, President of Glinsk Community Development. 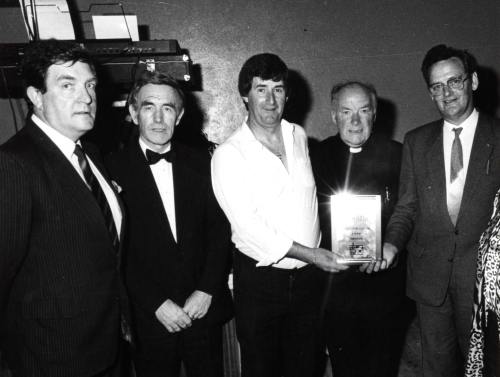 The very first Glinsk Song Contest which was held in july 1988 saw John Duggan emerge as winner with the song “Glinsk, the Pride Of My Heart” which was performed on the night by Dene Lane. Picture above shows: Charles Lynch, Galway Co. Enterprise Board(Adjudicator) Joe O’Neill of “O’Neill Sound”(Adjudicator), Dene Lane who sang the winning song, Fr. Tom Garvey making presentation and John Duggan, writer of the winning song. 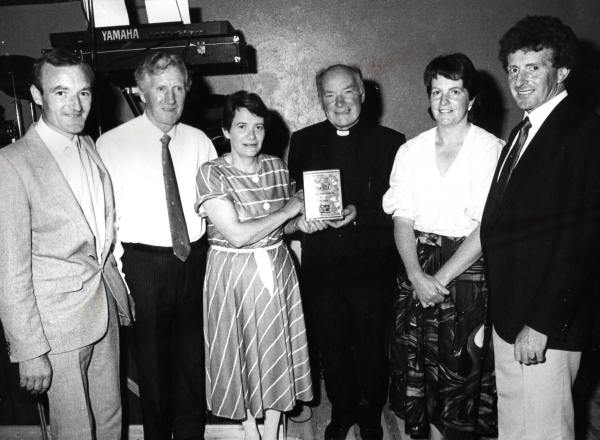 When news of the First Song Contest came to light, three local families were bitten by the songwriting bug namely the Gradys, Brennans and Naughtons. After burning lots of midnight oil the song “Home To Glinsk” emerged and was performed on the night by Marty Moore. It was placed in the top three by the adjudicators and the picture features: Marty Ward, Director of Song Contest, Micky Grady(co-composer), Nellie Naughton(co-composer), Fr. Tom Garvey, President of Glinsk Community Council, Anne Brennan(co-composer) and Tom Lohan, Chairman of Glinsk Community Council.